What is Gastroesophageal Reflux Disease (GERD)?

Although “heartburn” is often used to describe a variety of digestive problems, in medical terms, it is actually a symptom of gastroesophageal reflux disease. In this condition, stomach acids reflux or “back up” from the stomach into the esophagus. Heartburn is described as a harsh, burning sensation in the area in between your ribs or just below your neck. The feeling may radiate through the chest and into the throat and neck. Many adults in the United States experience this uncomfortable, burning sensation at least once a month. Other symptoms may also include vomiting or regurgitation, difficulty swallowing and chronic coughing or wheezing.

What Contributes to GERD?

Some people are born with a naturally weak sphincter (LES). For others, however, fatty and spicy foods, certain types of medication, tight clothing, smoking, drinking alcohol, vigorous exercise or changes in body position (bending over or lying down) may cause the LES to relax, causing reflux. A hiatal hernia is found in many patients who suffer from GERD. This refers to the condition in which the top part of the stomach bulges above the diaphragm and into the chest cavity. This phenomenon is thought to contribute to the development of acid reflux. Surgery for GERD also fixes the hiatal hernia.

What Are My Treatment Options?

Laparoscopic Nissen fundoplication is a minimally invasive procedure which is done to restore the function of the lower esophageal sphincter (the valve between the esophagus and the stomach) by wrapping the stomach around the esophagus. This procedure creates a new “functional valve” between the esophagus and the stomach and prevents reflux of the acid and bile (non-acidic fluid) from the stomach into the esophagus. It is well studied that patients with typical (common) symptoms of gastroesophageal reflux disease – heartburn, regurgitation and dysphagia (difficulty swallowing) – who respond well to antacid therapy and have a positive esophageal pH assessment (evidence of acid in the esophagus) have the best outcome after laparoscopic Nissen fundoplication. 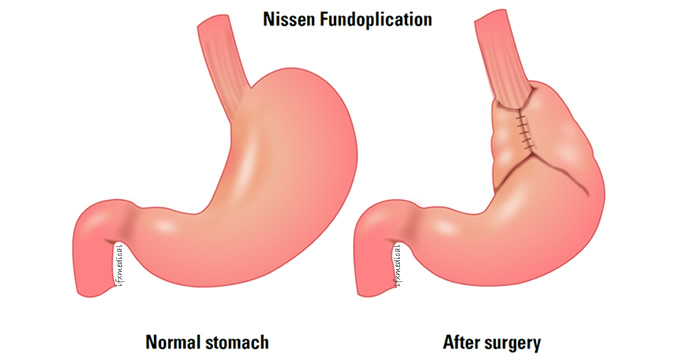